Point Calimere Wildlife Sanctuary (10’18’’N; 79”51’E), (Est.1967) along with the Great Vedaranyam Swamp covering an area of 22436.91 ha was declared as a RAMSAR Wetland Site (No.1210) at the 8th meeting of the Conference of the Parties (COP 8) held at Velancia from 18-26th November 2002.The total area of the Point Calimere Wetland Complex is 38500 ha situated in Nagapattinam and Tiruvarur Districts. The sanctuary derives its name from the term ‘Point Calimere’ the spot in the sanctuary where the coast takes a 90 Degree turn from the Bay of Bengal towards Palk Strait in Southern India.

The area was designated as RAMSAR site no.1210 encompassing the following areas:

Traditionally the Tropical Dry Evergreen Forests around Point Calimere were administered by The Revenue Department and Temple trustees, who allowed local people to collect firewood, fish and Minor Forest Produce (MFP), thus it was continuously exploited until 1892. Though the formal protection of this forest has begun during 1892 by creation of Kodiakkadu Reserve Forest, the British Government later cleared some area of this forest for hunting ground and later established Eucalyptus and Casuarina plantations for firewood purpose. Since 1911, this forest was protected by Revenue Divisional Officer, Mannargudi to the present Wildlife Warden, Nagapattinam, (1986 onwards). Point Calimere Wildlife Sanctuary, forms part of the Point Calimere Wetland complex and is notified as a Ramsar Site, No1210 in 2002.

Forests are the green lungs of the earth and cater to many ecological and domestic needs of the human beings; especially the endemic forests are diverse in nature and are playing a unique role in maintaining the ecosystem balance. Point Calimere Wetland Complex is a mixture of Tropical Dry Evergreen Forests, Savanna grasslands, tidal mud flats, tidal creeks, lagoon, flat coastal region, backwaters and mangroves. Point Calimere Wildlife Sanctuary forms the eastern limit of the Ramsar Site. This Tropical Dry Evergreen Forests of the sanctuary is considered as the best in the country, both in terms of species richness and conservation status.

Muthupet area within the wetland complex is the largest mangrove wetland in Tamil Nadu covering an area of 11,900 hectares. It constitutes the western limit of the Ramsar Site. Avicennia marina is the dominant mangrove species

The sanctuary is home to the largest population of the endemic Blackbuck (Antilopecervicapra) in Southern India. Other fauna are feral horses, jackal, Wild boar, spotted deer,etc. 364 species of flowering plants including 198 species of medicinal plants have been recorded in the sanctuary. In terms of bio-diversity, Point Calimere Wildlife Sanctuary is the richest component of the Ramsar Site.

The Wetland Complex has also been listed as one of the Important Bird Areas of the country by the Bombay Natural History Society. Large no. of land birds, water birds and migratory birds visit the wetland complex every year during December to January. Greater Flamingos are the main attraction during that time. Between Sri Lanka and India, in the Palk Bay and the Gulf of Mannar, Dugongs are found. It is listed under schedule I of Indian Wildlife Protection Act, 1972.

The coastal mud flats of the Wetland complex arerecognized as the nesting sites of Olive Ridley Turtle. One of the largest patches of TDEF is located in the Point Calimere Wildlife Sanctuary which is considered as India’s greatest avian spectacle and potential Ecotourism site.
The Point Calimere Wildlife and Bird Sanctuary along with the great Vedaranyam Swamp, and the mangrove forests of Talainayar Reserve Forest plays an important role in disaster management by acting as a bioshield during Tsunami, floods and cyclones. The TDEF is not continuous but interrupted by many tidal inlets and creeks of varying lengths and widths, which are flooded during the monsoon (mudflats) and drains in May and June with the onset of the Westerly winds. There are also broken stretches of open grazing lands, especially the southern and western portions; mangroves along the Muniyappan lake and near the light house; and dune vegetation on the coast. There are two villages, Kodiakkarai and Kodiakkadu, on south-western outskirts of the forest. 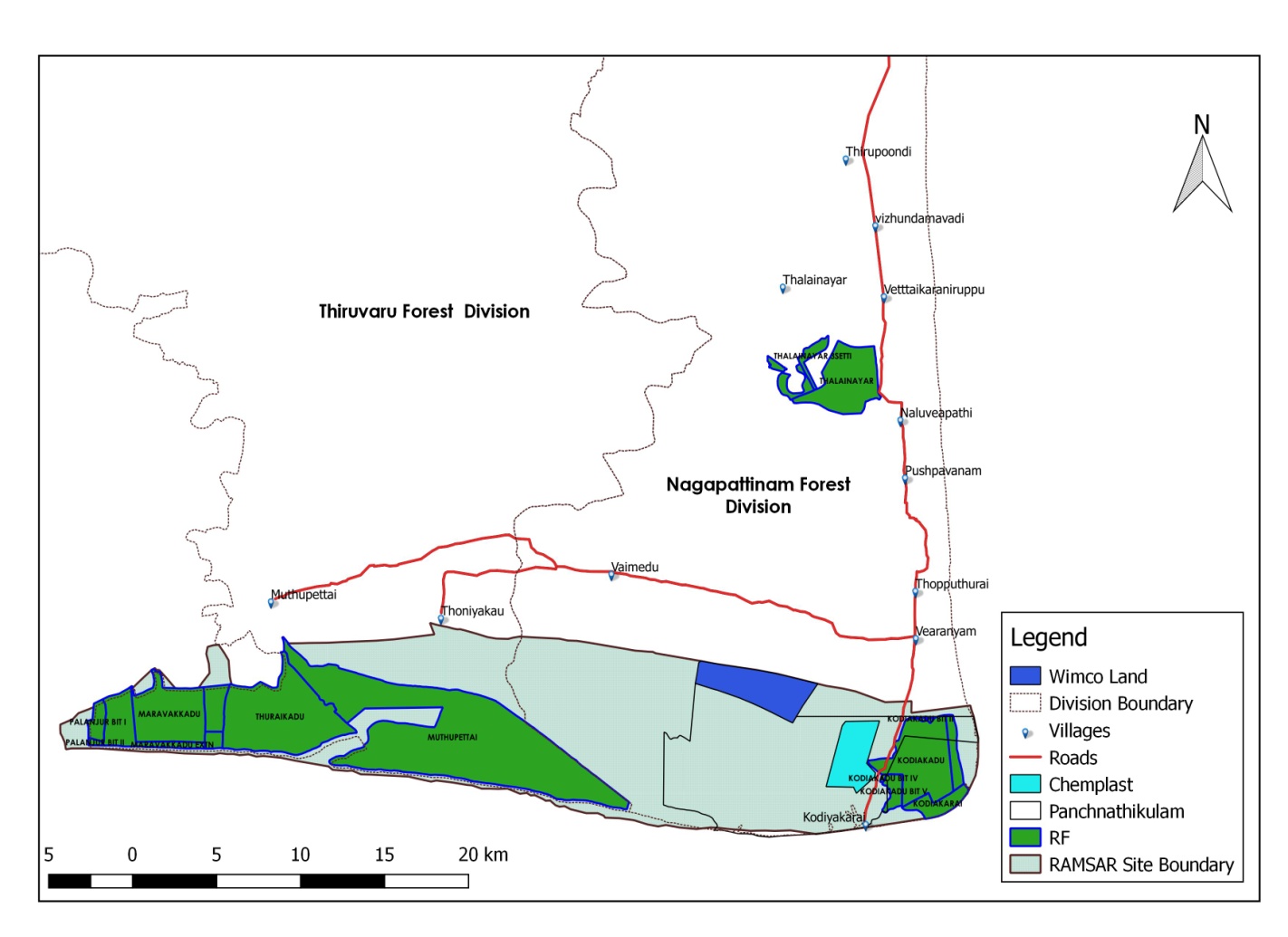 “Wise Use” of Wetlands

The “wise use” concept adopted by the Ramsar Convention’s contracting Parties is widely recognized as the longest established example amongst Inter Governmental processes of the implementation of ecosystem based landscape approach for the conservation and sustainable development of natural resources, including wetlands.

Wise use and the maintenance of the ecological character of the wetlands form the guiding principles for wetland management planning under the Ramsar convention.