The Pallikaranai Marsh, (located on the geo-coordinates of 12.949371 N latitude and 80.218184E longitude), is one of the last remaining natural wetlands of Chennai city. It is locally known by the generic Tamil name ‘kazhuveli’ which means a flood plain or water logged area. On its eastern periphery, the Marsh is flanked by the Buckingham Canal and the Old Mahabalipuram Road, which houses the Information Technology (IT) Corridor. The southern and western boundaries are typified by mixed residential and institutional land use. To the North of the Marsh, there are dense human habitations and public infrastructure such as the Mass Rapid Transit System. Pallikaranai Marsh drains an area of 250 km2 of South Chennai encompassing 65 wetlands through two outlets viz., Okkiyam Madavu and the Kovalam creek and falls into the Bay of Bengal. The topography of the Marsh is such that it always retains some storage, thus forming a classic wetland ecosystem.

Pallikaranai Marsh is a part of the vast Bay of Bengal Large Marine Ecosystem. It is one of the few natural coastal aquatic habitats that qualify as a wetland in India. The seasonal dynamics in water volume, spread and chemistry, both historical and current, have rendered the Pallikaranai Marsh a biodiversity-rich South Indian wetland. This uniquely heterogeneous hydrology and ecology also makes the Marsh one of the most diverse natural habitats of the country. Biodiversity of Pallikaranai Marsh is typified by the presence of species representing various faunal groups, of which birds, fishes and reptiles are the most prominent. It is the natural habitat to some of the most endangered reptiles such as the Russel’s Viper and birds such as the Glossy lbis, Pheasant-tailed Jacana etc., The Marsh also has the distinction of new records of reptiles and plants being described, on a rather regular basis since 2002.

Although tropical in bio-climate, the influence of the Bay of Bengal has been significant on the Marsh. Dramatic changes in its hydrology and biodiversity witnessed annually may be attributed to the maritime influence and the vagaries of the North East Monsoon. The fact that the Marsh is so close to the sea and yet not fully estuarine is a unique character indeed. Parts of the Marsh are well below the mean sea level and qualify as low-lying basins. It is but natural that some parts of the Marsh are estuarine / brackish and harbour maritime animals such as mud crab, window-pane oysters and other bivalves.
The mixing of freshwater and seawater is brought about by the huge volume of surface runoff that the Marsh receives year after year during the monsoons. A right mix of freshwater and seawater is important in maintaining the ecological integrity of the Marsh. For , in the natural process of ecological succession, Marshes tend to give way to grasslands and scrub, eventually attracting the colonization of woody shrubs and trees. The heavy inflow of freshwater every year and the influence of tidal water that is brackish (if not saline) have limited the vegetation to herbaceous plants including salt tolerant
Sedges like fimbristylis triflora and grasses, Surface runoff from almost all sides, the tidal influence from the south and southwest and the dense growth of emergent aquatic plants have balanced siltation, creating extensive mudflats and wide sediment banks that border the shallow water. 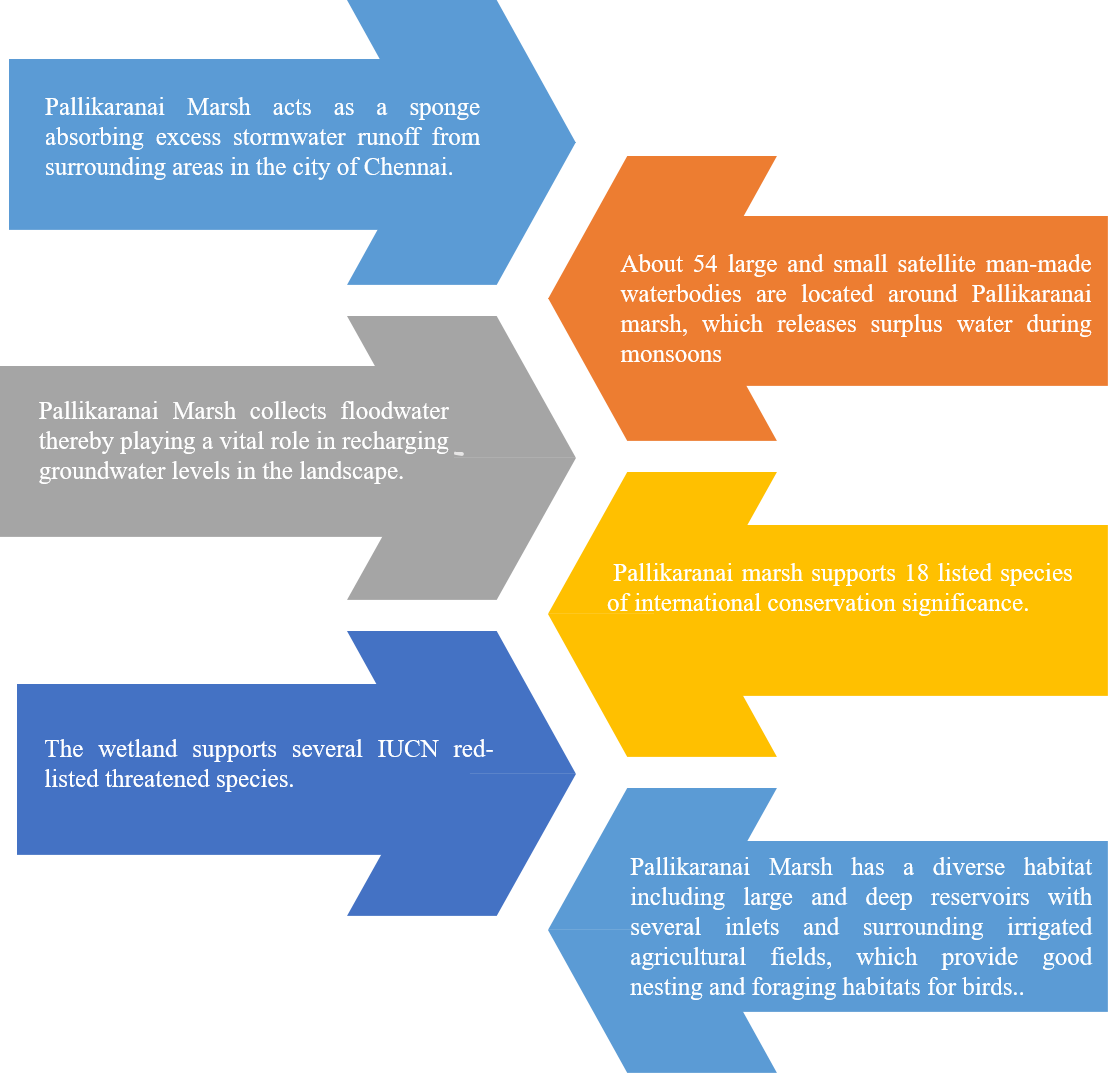 Large parcels of the Pallikaranai Marsh have been lost due to reduction of wetland area, fragmentation and adhoc manipulation, destroying 90% of the Marsh. The remnant 10%, which is a Protected Area is the last hope for the city of Chennai. 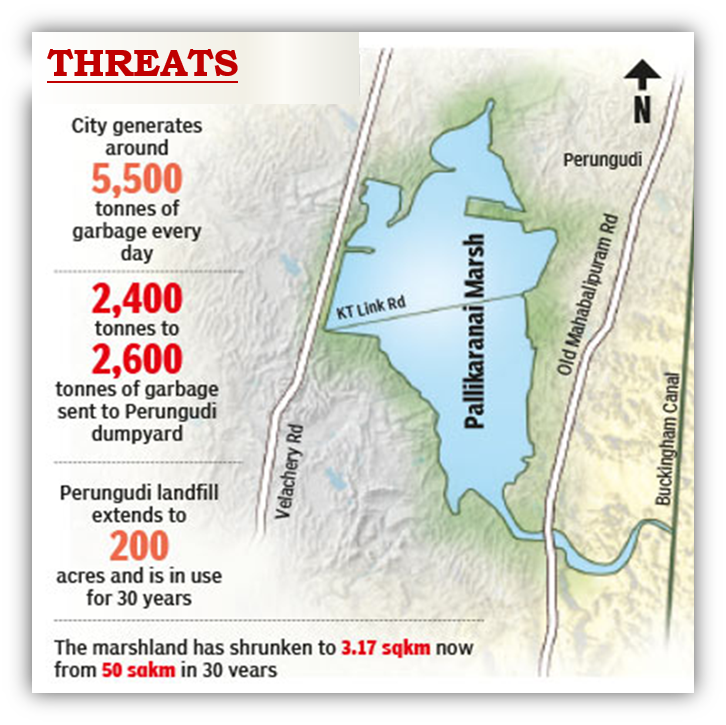 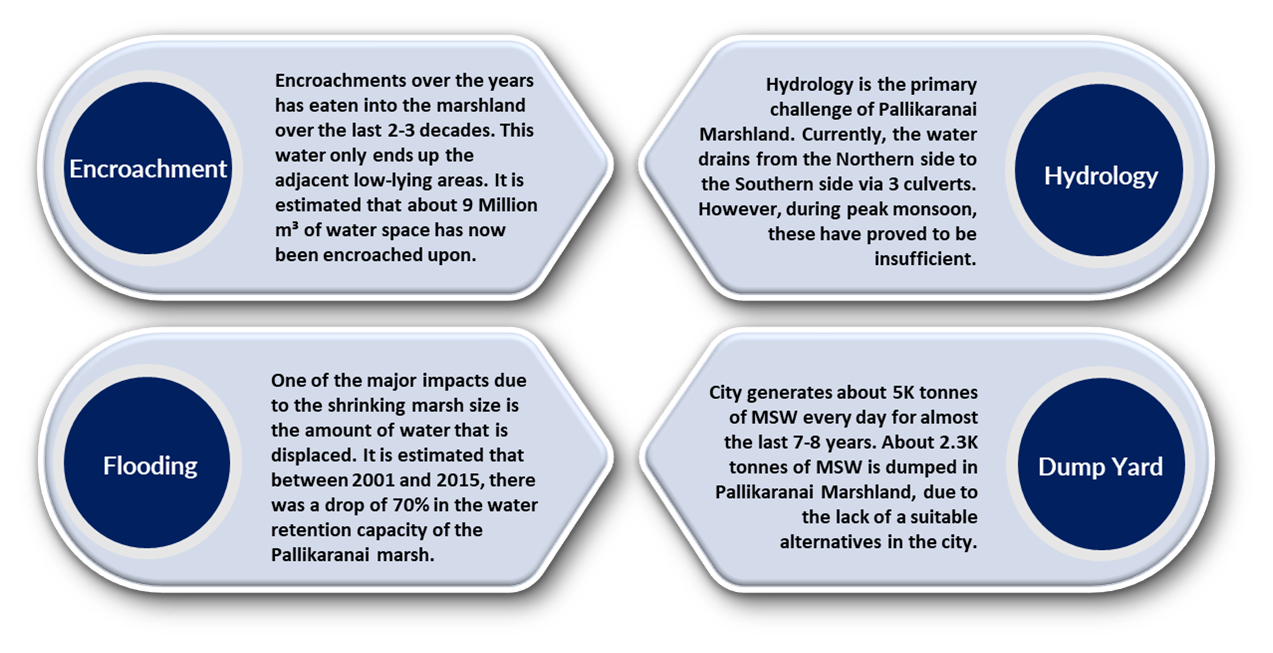 A large part of Southern Chennai was historically a flood plain as evidenced by the soil type of the region, which is described as recent alluvium and granite gneiss. Spread over 50 sq.km, it comprised of a large Marsh (Pallikaranai Marsh), smaller satellite wetlands, large tracts of pasture land and patches of dry forests (Guindy National Park, Nanmangalam Forest and the Theosophical society). The composite Nature of the landscape can be defined as a coastal plain with intermittent and overlapping habitat types of cultivation, wetlands and scrub forests. Based on the study of sediments, it has been established that the Marsh is not less than 1000 years old. Sub-fossils of marine crustaceans and molluscans unearthed locally reinforce the suggestion that there was historical influence of the sea on the Marsh. It is also of significance that the smaller wetlands that surrounded the Marsh served as the only source of irrigation for the area, which thrived on paddy and green leafy vegetable cultivation. This gave the Marsh a legendary status since the village did not have wells or dug-out ponds, which are the norm in the Northern districts of Tamil Nadu (TN). The presence of a freshwater aquifer running parallel to the coast has contributed rather significantly to the expansion of the city’s boundaries in the south which is one of the may pointers to the presence and importance of the south Chennai Flood plain.

Life in and around the Pallikaranai Marsh is contributed equally by it delicately balanced hydrology and resultant biodiversity. The natural geo-chemical cycles of the Marsh, although considerably disturbed by highly transformative human interference such as waste disposal and heavy footprint habitation and the associated infrastructure development, continue to sustain its unique hydrology and biodiversity.
Heterogeneous landscapes are known to support greater biodiversity than landscapes that are monotonous. The watershed-landscapes that are monotonous. The watershed- landscape that cradles the Pallikaranai Marsh is a mosaic of freshwater, brackish water, estuarine conditions, beaches, sea, wooded plains and hillocks. There has been a steady increase in the diversity of birds and their populations in the past 10 years. While the obvious sign of resilience has been the overall increase in birds which is an indication that the underwater biodiversity is also resilient and the ecological web that sustains the Pallikaranai Marsh is relatively intact.
Pallikaranai Marsh land in a treasure trove of biodiversity and is home to a wide array of species. There are 625 species of Plants and animals. There are 176 recorded species of birds. The bird diversity is an indicator of the health of the Marsh. 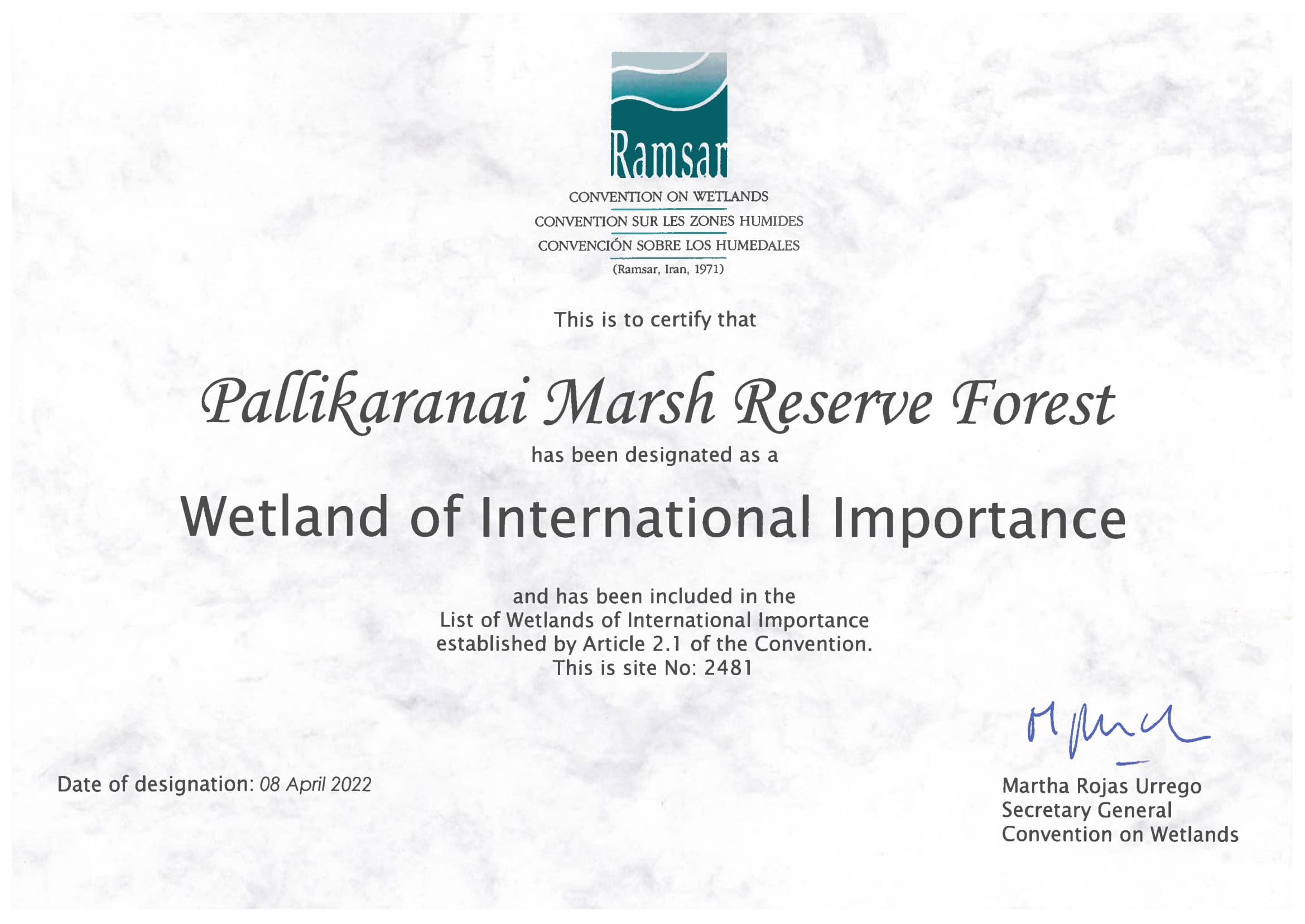